As I was putting stamps on my traditionally late Christmas cards and trying to remember where I have hidden the presents for my loved ones, I came across an article on BBC News with the slightly bewildering title “Abstract Christmas tree sparks protests in Brussels”. Interesting, I thought. That must be some tree! – And then I nearly swallowed the stamp I was licking: “More than 11,000 signatures have been gathered in the online petition and a Facebook page attacking the new feature has been launched!“

Now I am the last person to be surprised about discussions concerning Christmas decorations. Every year my family has fairly heated ones about the tree gracing our living room: the Conservative fraction, if given free reign, will not only put up the same ornaments that have been in the family since the 1920s but also hang them in exactly the same way every year; the Greens prefer (organic) nuts and apples over baubles; and there is also a small but very prominent Party for Progress (the infamous Fashion Hawks) who wanted to go for monochrome purple shades in 2011 and advocated white-and-silver-only in 2012.

But what on earth could be the source of such excitement in Brussels?Instead of a “real”, i.e. traditional pine Christmas tree the City of Brussels is displaying an abstract object of art that only faintly resembles a tree shape. To be frank, I am not a big fan of the thing myself. 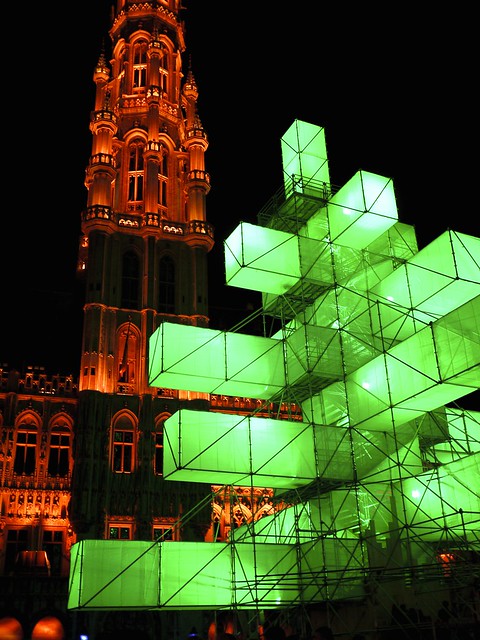 (Copyrights belong to TheNewRA who posted the image on flickr)

It reminds me of the “minimalist manger” one of my cousins introduced last year – it essentially consisted of a few wooden blocks that were labelled “Baby Jesus”, “King 1, 2, 3”, “Ox” etc. It doesn’t exactly appeal to my aesthetic sense – but I would certainly not be inclined to sign a petition against it! De gustibus non est disputandum… Perhaps the artist who designed this installation was inspired by fond childhood memories of playing Tetris on one of those brick-like grey Gameboys under the Christmas tree in ‘91. I can totally relate to that. And we can have a traditional pine tree again next year, can’t we?

Unfortunately, the debate about the Brussels Christmas tree is not a pluralist discussion about taste, I realised when reading through the almost 400 comments on the BBC News page. “Critics accuse officials of opting for the installation for fear of offending non-Christians, especially Muslims,” the BBC article went on. Other papers were not quite as pc about it: “Brussels sacrifices Christmas tree to multiculti”, exclaims the Lithuanian liberal daily Lietuvos rytas indignantly and concludes: “The weary and lethargic Christian Europe is willing to submissively give up its traditions on its own territory (…)”. Is that so? Do we really feel that threatended? Do we have to? I just had a stop-over in Qatar – and what greeted me at the airport? A HUGE and beautifully decorated Christmas tree! The general verdict “Muslims take offence in Christmas trees” can, hence, not be true. There may be individuals whose ideas of what should decorate a public space are different and those may happen to be Muslim – but that is democracy for you.

The debate about the Tetris tree in Brussels points toward a much bigger issue stirring up (not only the capital of) the EU. I find it alarming that the first thought upon seeing this experiment of a Christmas tree is not “Ugh, I don’t like this!” – “It is not pretty!” – Or  “I want the same tree my grandparents had!” But: “Those Muslims are mucking with our Christian traditions!” (Pardon my Mrench!) How did such a peaceful, and essentially pagan, symbol become a vehicle for xenophic propaganda on either side of the political and cultural spectrum? I am not claiming that it is always easy to handle our differences, but we, the Europeans – and I am speaking about all of us living together on this continent – really need to learn that tolerance is not only something we can claim from others for ourselves. I firmly believe, diversity is one of Europe’s great assets. And as the diverse fractions of my family have always managed to overcome their differences without creating lasting damage – we usually end up siting together, peacefully munching fruitcakes and gingerbread – I am convinced we, the European family, shall overcome, too!