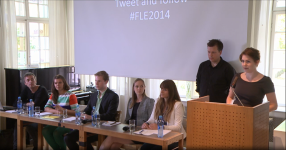 Traditional media, such as newspapers, magazines, radio and television are often perceived as the stronghold of the older generations. Digital natives, born into the information age, are said to prefer online media. Does this divide reflect the European media landscape today? If we presume that an open and transparent exchange of ideas is a prerequisite for a healthy democracy – what does it say about the EU that this seems to be missing? On which arenas are European citizens most likely to engage in political debates? Can social media open up a new space for discussing the European Project?

FutureLab Europe participants discussed their position paper with keynote speakers Gregor Peter Schmitz, European correspondent of Der Spiegel and Lisbeth Kirk, founder and managing editor of EUobserver. The debated continued with Kait Bolongaro, Editor-in-Chief for the English edition of cafébabel, Bente Kalsnes, Institute for Media and Communication, University of Oslo, and Sten Inge Jørgensen, Morgenbladet, with whom they discussed the possibilities of participation for all European citizens through social media.

With the insight, that “we have to shape our new public spaces”, Knut Olav Åmås, Director of the hosting Fritt Ord Foundation, welcomed the audience at the foundation´s event venue. He stressed how amazed he had been himself at the privilege to communicate with so many people every day through his twitter account, a medium he had to get used to during his time as editor at Eurozine five years ago.

Questions and remarks were welcome on twitter using  the hashtag #FLE2014.

For FutureLab Europe, Enja Sæthren from Norway and Doru Toma from Romania explained the postulations from the FutureLab Europe position paper prepared for the debate, lining out their point of view on the challenges and opportunities coming with new media and the need for a pan-European debate. For them, Europe is by no means limited by EU membership, and a pan-European debate should by no means be limited to political topics. This Europe needs a public sphere, where citizens can debate their ideas and perspectives on European topics. In order to draw a representative audience, debates have to take place where the citizens are and new social media offer the best possible means for, the young Europeans underlined.

Keynote speakers Peter Gregor Schmitz, European correspondent of Der Spiegel, and Lisbeth Kirk, Editor in chief of the EU Observer, added their experiences in communicating European topics. Schmitz, who had formerly been reporting from the USA, compared the European approach to the American one. Based on the example of the EP elections, he concluded that Europe lacked newsworthy attractiveness in both candidates and content. 24 official languages and as many social media accounts put the brakes on a quick and personal communication. Nevertheless, both keynote speakers noted a stronger interest in European issues during the last EP elections. Kirk added, how important it is to understand, that even the last EP elections were nothing more than 28 national elections. This is why the EU Observer focused on reporting the national debates and brought them all together, thus adding the necessary European perspective. Despite publishing in English, they were successful in starting topic-related transnational debates and sometimes even provided the springboard to a European debate of formerly neglected issues, such as the voter fraud in some EU member states, Kirk said.

Both keynote speakers admitted, that for some topics their online forum for comments would be closed due to too many harassing or hate-speech comments. There seemed to be no common European solution so far in drawing a line between what can go online and not. In Norway, where the freedom of speech is broadly granted, this line would, for example, be different from Germany, where for example denying the Holocaust is liable to prosecution.

During the second half of the debate, Kait Bolongaro, Editor-in-Chief for the English edition of Café Babel, Bente Kalsnes, Institute for Media and Communication, University of Oslo, and Sten Inge Jørgensen, of the Norwegian weekly newspaper Morgenbladet together with the FutureLab Europe participants Kati Temonen and Stephan Kool explored the role social media will have for future citizens’ participation. They, too, expressed the need for a local base to build on. For Café Babel, volunteers reported national news and provided the insight needed to understand the various local facets that add up to a more complete and picture. While for Café Babel it is crucial to draw young people into social media in order to engage them in a debate, Jørgensen conceded that Morgenbladed currently intends to hold on to its traditional and still successful print form.

Yet all discussants agreed that for a lively and fruitful debate, clearly defined topics discussed in small networks and in different languages were important. Politicians should join the debates personally – not only online but also in real events. This way, citizens could raise their voice directly on issues that matter to them. The biggest challenge for the European public sphere remains the language question. The panelists underlined that with social media there are already first solutions to this challenge which might improve during the next couple of years. After all, they stressed, it would be shame to melt all of Europe into one master tongue.