The Norwegian launch of the book and the performance took place at the Fritt Ord Foundation, Uranienborgveien 2, in Oslo on February 28, 2018. The Letters to Europe team was invited by the Fritt Ord Foundation after they have attended the performance in Brussels. The team presented the project and the book “Letters to Europe – refugee women write”  (digital version available here) collecting the stories of 15 female refugees. After the presentation, the team performed the theatre play ‘refugee (woman) :)’, written and directed by project member Konstantin Buchholz, on the basis of the stories featured in the book. The performance was followed by a panel discussion with the actors as well as two speakers invited for the occasion: Dana Æsæl Manouchehri, Secretary General of the think tank LIM, and Ines Lukac, a Serbian trans-activist based in Stockholm and one of the authors of the book ‘Letters to Europe: refugee women write’, discussed with the audience about the content of the book, the performance and the challenge of being a refugee. At the end, a copy of the book was distributed to every participant. 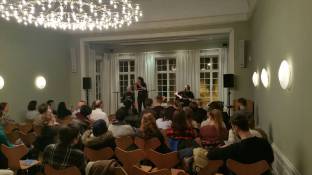 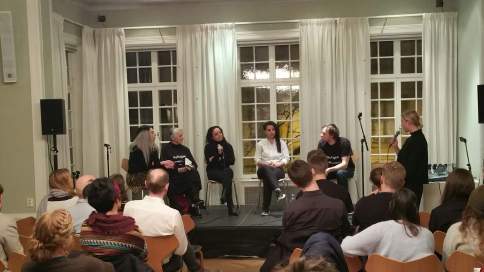 The refugee crisis in Europe has raised tempers and become a subject of debate in almost every country. Over the course of the process, a stereotype has evolved, painting the ‘young, male Syrian refugee’ as the typical asylum seeker. This narrative leaves little space to talk about the often widely divergent backgrounds and identities of refugees and makes it easier to ignore refugee women, children, the elderly and their needs and role in the future of Europe.

‘One of the most difficult questions I have been called to answer throughout my life is: “Where do you come from?” It seems like a simple questions. Unfortunately that’s not the case for me. This is because I’m never quite sure of the right answer’

Against this background, the Letters to Europe – Female Refugees Telling Their Stories project has set out to draw refugee women into the public debate, making them the subjects and authors of their own stories, and not the object of somebody else’s narrative.

In their role as Europe’s newcomers, refugee women expressed why they came to Europe and what they feel about their new homeland, thereby informing the debate on European identity. The book aimed to empower women’s voices, making their stories accessible in English to a broader European audience.

The story of each author is very diverse: there is Gudrun, who was forced to flee Sudetenland with her family in 1945, Sarvin from Iran, who sought refuge in the Netherlands to escape discrimination for her sexual orientation, or Darija, who escaped war-torn Bosnia to seek refugee with her family in Serbia.

Terry Reintke, Member of the European Parliament, and Adriana Altaras, actress, theatre producer and writer, wrote a foreword to the book.

The book includes also drawings made by children from Afghanistan who are living in a Greek refugee centre as part of the Colours of a Journey project. The children were asked to draw their past, present and future. 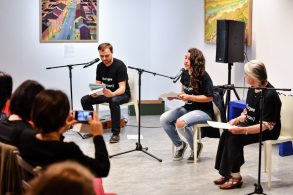 “I am who I am. And I enjoy it. Nothing before ever stopped me. And nothing will now.” That is one of the key sentences in Syrian actress and musician Enana’s performance of ‘Refugee (Woman) : )’. Who am I in this world? How do I define myself? What has my past got to do with it? What does being a refugee have to do with my identity? Or being a woman?

These questions are answered in many different ways by the women that wrote the book ‘Letters to Europe – refugee women write’. Gudrun Buchholz tells about her banishment and flight from Czechoslovakia in 1945-46; the 22-year old Enana talks about her search for freedom and the wish to express her queerness in Damascus and Berlin, while director and actor Konstantin Buchholz accompanies them with gospel, blues and protest song tunes. The centre of the performance is the artistic approach to the labels ‘refugee’ and ‘women’ in the context of modern society.

Gudrun Buchholz was born just before the beginning of World War II in a village in northern Bohemia, which today is part of the Czech Republic. As a child, she experienced war, and was forced to flee while taking care of her three little siblings. Her father had died in the war and her mother was seriously ill. Today, at age 79, she has four children, nine grandchildren and three great-grandchildren. Gudrun lives together with her husband and many animals on a farm in northern Germany.

Enana is a 22-year-old artist from Syria. She is a singer/songwriter, studied music at a classical music academy in Damascus and participated in acting/theater coaching in a performing arts school. At the University of Damascus, she studied English literature but had to leave the country before she could finish her studies. Today, Enana works as musician, actress and translator and lives in Berlin. 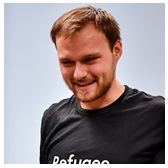 Konstantin Buchholz studied acting at the Hochschule für Schauspielkunst “Ernst Busch” in Berlin. He worked in several theatre plays in Berlin and Stuttgart and joined the Ensemble in Oberhausen from 2013-2017. In 2012 he started directing. His theatre plays were played on stages in Oberhausen, Berlin and on festivals in Poland and Ukraine. In 2014 he founded the theatre ensemble WHEELS and specialised on multilingual, international theatre plays produced in cooperation with theatres from Poland, Ukraine, Greece, Latvia and Italy. In 2015 his interpretation of “A report for an academy” by Franz Kafka was chosen for the german pavillion at the Expo in Milan. Konstantin is working as an actor, director, musician and author and lives in Hamburg.

For information on the play or booking please contact Konstantin Buchholz: