Posted on 04. September 2015 bySadik Tabar It had been a long time since we could set eyes on a pro-government rally in the Syntagma Square in Greece. Since the Syriza took power in the beginning of 2015, as the Greek PM of new tenure, Tsipras tenaciously emphasised that the Greek debt crisis is essentially … END_OF_DOCUMENT_TOKEN_TO_BE_REPLACED

Posted on 28. July 2015 by Lotta Schneidemesser A month ago, Thom Feeney, a young Associate Community Manager from London, started a crowdfunding campaign to bail out Greece. His idea was a simple one: If every one of the more than 503 million EU citizens donated only a few euro each, then Greece’s debts could have … END_OF_DOCUMENT_TOKEN_TO_BE_REPLACED 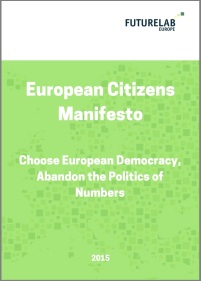 The critical negotiations carried out over the past months between the Greek government and the Eurogroup on the future of the financial assistance programme to Greece triggered a discussion that went way beyond mere economic reforms and financial plans. Concerns about the status of democracy in the EU, solidarity and the future of the Union were voiced by many, who fear the consequences that the handling on the Greek crisis will have on the European continent.

In light of recent developments and worried about the future of the EU and its democracy, a few members of FutureLab Europe wrote together the Manifesto Choose European Democracy, Abandon the Politics of Numbers!

Posted on 23. January 2015 by Konstantina Karydi Elections again. Already a phrase almost worth laughing about in some peoples’ minds. Citizens in their 30s, have already voted more times than some of our parents have in their lifetime, some will say. Yet, the laughing stops there. Elections, a very serious act indeed. And the beginning … END_OF_DOCUMENT_TOKEN_TO_BE_REPLACED

Posted on 29. May 2014 by Konstantina Karydi Citizens in Greece, once again demonstrated their support to the European project as well as their commitment to the values embedded in the EU.  While the average participation rate in the EU is  43%, 59% of Greek citizens voted for the EP elections. “The Party of the European … END_OF_DOCUMENT_TOKEN_TO_BE_REPLACED